When qualifying starts all drivers will be in spectator mode. The admin will call up all present driver in reverse championship order. When a driver is called up, he'll join the session and leave the pit lane. As always, no driver will be allowed to cross the very long, yellow pit exit blendline when leaving pit lane. It's advised that all drivers are to complete their out-lap in a timely manner to make sure as many cars as possible can be on-track at the same time. Once a driver has finished his run, he must spectate as quickly as possible.

Should a driver receive a penalty during his run, for example a DT for pit lane speeding, he must complete this penalty at the earliest opportunity! Not serving penalties will lead to the driver in question being moved to the back of the grid!

After the time has expired, all drivers are asked to park their car in the pit lane and to not lap the track!

Just like in the first ever CL event in the year 1831, there will be a laglap before the actual start of the race. The run to the first corner is pretty long and with T1 as well as the following chicane being very narrow, please be careful, especially on the first lap, and don't stick your nose into gaps that might disappear as quickly as they appeared in the first place.

To make the race a bit more interesting there will also be an element of strategy in form of a mandatory pit stop. Drivers must change at least two tyres in their pit stop. Whether they change more tyres or do anything else on the car will be up to them. Since there is no specific pit window, the pit stop can be made in any lap except for the final lap. Of course, the pit exit blend line must not be crossed when doing so.

Similar to last seasons final on Blackwood for the current season the decision for the championship is in the last race. This season even three drivers have the chance for the title. First P.Kubinji as championship leader with 2002 points followed by C.Winkler with 1977 points and Pete with 1953 points. The following scenarios must occur in the last race, so that these drivers are champions.

Congratulations Cali and thanks to the admin team and all of the drivers for another great season of racing!
cargame.nl 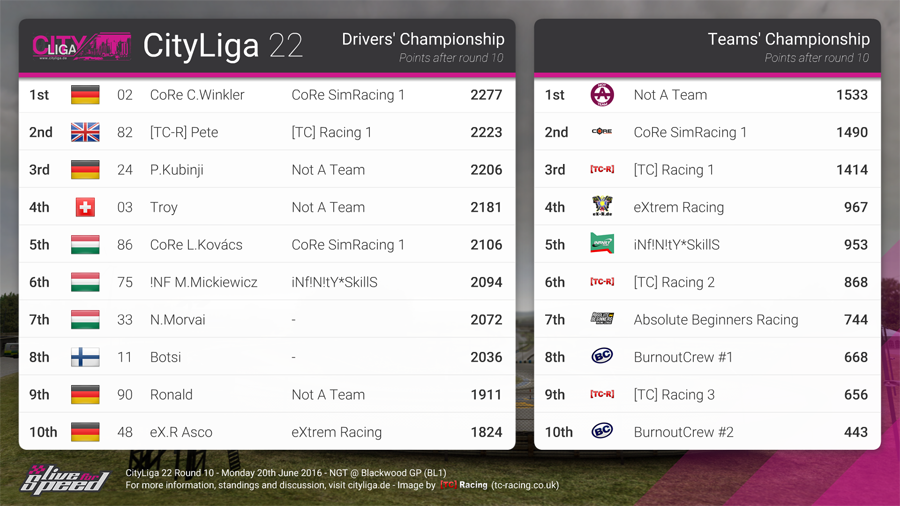