During qualifying all drivers will be able to complete as many laps as they wish. The difference to a normal timed qualifying session is that all drivers are only allowed to leave the pit lane once and must do so with the setup and fuel load they intend to start the race with. Every driver who jumps to the pits or spectates the session will automatically be disqualified from the session and has to start the race from the back of the grid. As always the following rules are also in force: The pit exit blendline is not to be crossed by any parts of the car and it's every driver's own responibility to leave large enough gaps to the cars in front before going on a hot lap.

Should a driver receive a penalty during qualifying, like a DT for pit lane speeding, then he must serve this penalty at the earliest opportunity. Not doing so will result in the affected driver being moved to the back of the grid!

When the session time has expired, all drivers are asked to drive back to the pit lane and park their car there. No driver will be allowed to keep circulating to further practice laps.

As always, the race will start with a laglap. Due to the race fuel qualifying mode, drivers who jump to the pits during the laglap will receive a stop-go penalty after the race start.

Since the FO8 is a car which heavily relies on downforce to achieve its performance, all drivers are asked to be extremely careful in the first few laps of the race as well as in battles with other competitors! The distance to the first turn, as well as to the first hairpin just before the end of the first sector, is quite long. It is possible for a single rash maneuver from any driver to ruin the race of multiple drivers.

To make the race a bit more interesting there will also be an element of strategy in form of a mandatory pit stop. Drivers will be free to decide on whether they do any work on their cars or not. Since there is no specific pit window, the pit stop can be made in any lap except for the final lap. Of course, the pit exit blend line must not be crossed when doing so.

Copy/paste is always source of evil

Can I join for this race?
n3ox

You have to be signed up for the season. Please be sure to read and understand the rules!
Signing up for the page and the season is handled all at www.cityliga.de
Eclipsed

Besides the post above - you'll be put in 2nd grid with nubs like for example me and Franky,so be prepared for some proper crashing!

Luckily for grid 2, if Frank finishes well in this round he'll be promoted into grid 1 for the next race. Then we'll have to deal with him.

Just keep in mind that skill, experience and speed levels vary significantly in Grid 2 and you have to take compromises in your choice of racing lines when lapping and to stay on an expectable line when being lapped.
vitaly_m

Didn't you split the grid based on qualy result? Or maybe that was another league...
cargame.nl

I would suggest to join the practice race on sunday. Not so much for training, but it is mix of Grid 1+2 drivers so good way to get used to that kind of..traffic.

I've just registered for the race and will take into account all the advices you've given me. Also, will try to attend the training race, what time it will be?
n3ox 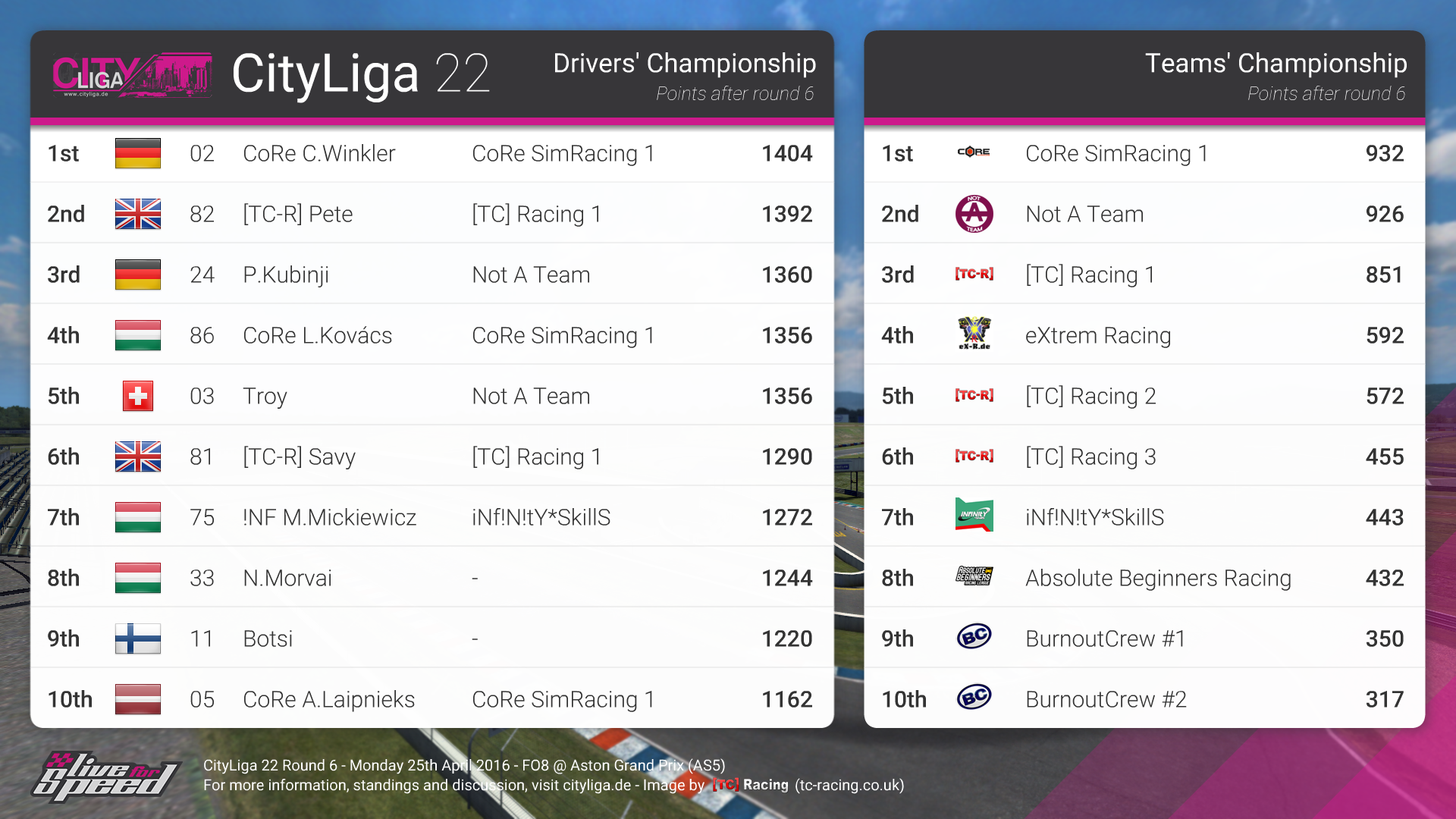 Why I'm even advancing...

I thought I dug my chance together with car in that gravel trap...