As far as the competitive league community goes, it has been gone for years already.

Although it has been receiving really nice updates, the pace of those updates and new content being released have been painfully slow.

They released 1 single track for more than 10 years. No new cars for more than a decade.
It's very sad because racing here used to be insanely good and very competitive, lots of fun. But eventually other sims stepped up their game and teams/players gradually migrated to them.

As the simracing scene grew up a lot over the last few years LFS barely changed, stagnant I should say.
So doesn't surprise me you're seeing the cruise servers being the only ones being full 90% of the time and rarely having a public racing server being full, let alone multiple ones like it used to be.

Damn it, sorry Deko for not letting you know I wouldn't be able to race on time.
I've been unexpectedly busy yesterday and today and I couldn't attend this race. (I really wanted it

Thanks for making this event tho, keeping NDR alive and wish you all a happy new year.
TBOC 2017 Holiday Special: Signups
Find post in thread
Wed, 6 Dec 2017 23:53
OTone

You are definitely not. You are the best stunt man the simracing world has ever seen!
Nearest future of LFS
Find post in thread
Sat, 21 Oct 2017 21:41
OTone

LFS community has gotten completely down by the devs not providing what the community wanted because "We want to run this way, no matter what!". No competitive racing anymore (with VERY, VERY few exceptions!), and now even cruise servers are getting attacked.


Just sad. Scavier will need to pull some set of miracles to get LFS to where it was. In other words, never. Now it's too late. LFS still is probably the best online racing platform available right now, as a base.
And the stubbornness of the devs have completely ruined it.

The fact that most people voted NO in this pool makes me cringe so hard.
New version 0.6Q - Realistic mirrors, better controller support and more
Find post in thread
Wed, 7 Sep 2016 20:47
OTone

Grats and thank you for this update!

I don't want to be rude but when I read that it looked like you went to an island for like a decade, away from what is going on with the game industry.
Steam (and Origin) has been around for few years already and more and more people are using specially Steam to play their games, it has it's own social network itself where you can see which games your friends are playing, what more advertisement do you want?
How do you think games like Rocket League, Dota and even CS:GO got so popular?

You can still find some events like Fox Friday at the Fragmaster server.
https://www.lfs.net/forum/418-Fragmaster%27s-Fox-Friday

I have a question UM21. Can you give me some internets? thank you
New version 0.6M - Rockingham update and many improvements
Find post in thread
Thu, 18 Feb 2016 18:59
OTone 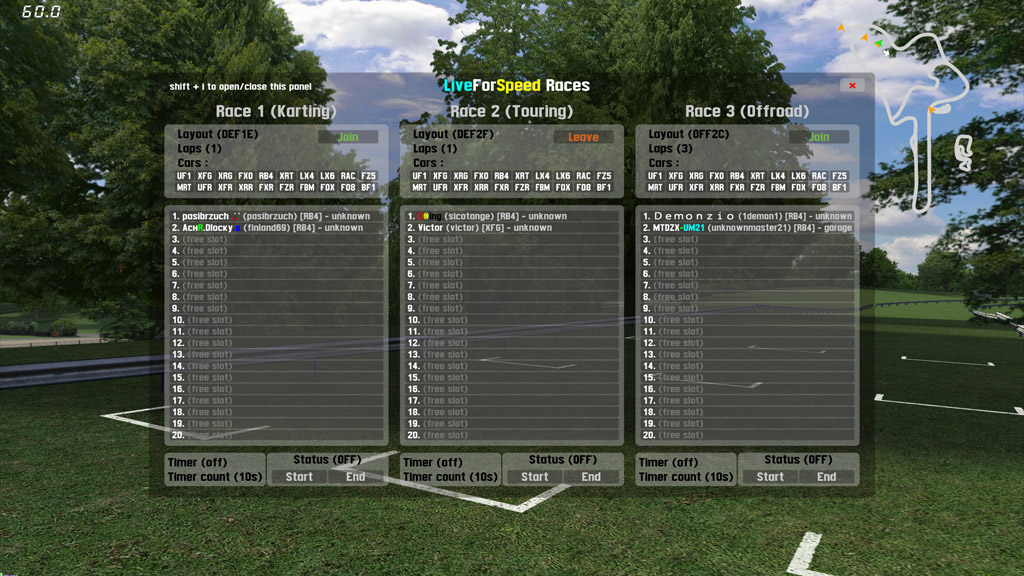 Is this supposed to mean we can have multiple races at the same time, in the same server? "Handbrake can no longer be used in single seater cars while moving."

This is actually something that was needed for a LOOOOOOOOOOOONG time! Thanks
LFSCART Series 2016: Round 0a S3 Voucher Event - Confirmations
Find post in thread
Sat, 2 Jan 2016 03:34
OTone

tom0900060, it's not just an oval track, it's quite a bit more than that.
I will rather wait and see what Scawen will say about the next batch of content they are working on now, as he said, then we'll see. I don't want to spend 16 or 17 euros on a license which I have no ideia how long it will take the devs to release more stuff.

Off Topic:
What are you talking about? Dave, stop being silly pls. That's not true.

Also, what's so wrong with a community asking Kunos or any other company to improve something on their software/whatever else for the good of everybody??
Stop being such a salty dick around here. It looks like you are doing this as a hobby or something.
You are not helping anybody by having such attitudes.

Yeah, I went to cargame.nl S2 a while ago only to find out that Saturday now runs multi class.
Well, it was kinda disappointing, since saturday specially was by far the most fun racing you could have in cargame.nl, even more than Formula BMW days.

Ray, there's a reason why I never accepted your team invitations

Dave, I for one definitely do not spend all my time in front of the PC playing games and moaning all day. But that doesn't mean I'm wrong in showing my concerns about the future of LFS.
If I am making these posts it's because I actually care about this game. I see the potential in it. I don't care if rFactor 2 has official tools for modders now. I'm not interested whether rFactor 2 dies today or in 10 years (if you catch my drift). I never liked it that much anyway. (Although I know it's a very nice sim for what it is)
And, once again, it's a shame that LFS is dead as it is now. You can barely find a public racing server with people except the Demo ones.

Do you enjoy joining a server without anyone? I don't think so.