Thanks! Yup, that pretty much sums it up, most of Reckless and Warlab have moved on as well.
Also, Giant is a good friend of mine but I am not him

My final LFS video that I have been working on since the beginning of April is finally here. Thanks for checking it out and I hope you enjoy!
https://www.youtube.com/watch?v=9UJq4hZyb40 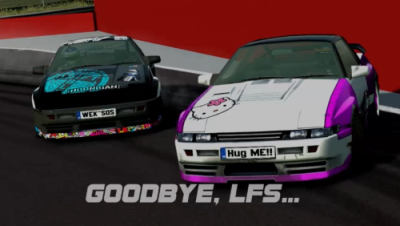 Hey guys! Thanks for checkin' out my thread. I'll go ahead and post links to a few of my videos, but this is the release of my latest work! I've got a lot of time and effort into these, so check it out! I hope you enjoy!

Well, ladies and gents. The title says it all. Been a while since I've posted anything here but I'm confident and appreciate feedback.

In my OP, I suggest this should have been done 4 years ago.
We're 10 months into a year with a developer admitting he hasn't done much.
I think I've made my point.
Nobody has asked outright....so guess I will
Find post in thread
Tue, 8 Oct 2013 19:03
LazLoW

Blah, blah. Nonsense. Just because I recommend open source do you think that you or I will be at the forefront of development? Of course not. Those who undertake the task know what they're doing. If they don't, they won't make it. It's survival of the fittest when it comes to a franchise of mods, and the best ones get the most attention. What you said couldn't be further from the truth.

P.S: You make too many assumptions. Of course somebody might invest in a 3rd party company that's pumping out sweet LFS mods. Anyway, like I said earlier, what I'm dreaming is a fantasy. It'll never happen so there's no point arguing it.
Nobody has asked outright....so guess I will
Find post in thread
Tue, 8 Oct 2013 17:42
LazLoW

Why, why, and why? The development team would multiply tenfold and then some. Individual teams, working on the separate niches of LFS. The community would not go away in the slightest, it would split and multiply. The drifters on the drift mods, racers on the race mods, and so on. All of the current driving physics would be available, why change them? Why would it go to shit? Please, tell me why, because I'm struggling to find anything.

It's not like it really matters. This is a fantasy I'm dreaming. This sim has been long doomed to a specific fate. Development hell.
Nobody has asked outright....so guess I will
Find post in thread
Tue, 8 Oct 2013 17:15
LazLoW

Seriously? You're gonna twist my words that hard?
Obviously it would be sorted out in a weekend if it was open source.
Wrong.
I don't expect anything to get done in a weekend buddy, but I don't expect any progress from a few guys that obviously don't care about the proper development of this game. Are you even all that interested in slightly tweaked tyre physics? I for one could really care less. They're good as they are. Add some tracks. Some content. Some proper updates that keep proper players interested. Weather, timecycle, and free-roam areas.
Tyre physics, a track or two. And that's S3? C'mon, where's your aspirations man. This sim won't become amazing because of a couple parameter changes. It needs an overhaul. Badly.

Never once have I had such a deep personal "irk" with development before. I love this sim so much. It deserves so much more. No matter how you see it, LFS is neglected.

I'm struggling to find some hard specs for Senna's MP4/4, I'd imagine at one point this would have been mostly classified information. I'm messing around with the F08 in NTO, love the idea of an H-Shifter in an open wheeler. I really love to find exact specs for a car and using NTO to emulate them as close as possible. As far as I know they were pushing ~900bhp in racing setups, and ~1100+ during practice/qualification, but some exact figures would be awesome.

I'll leave it up to the great knowledge of the LFS community to fill this gap, and any information is greatly appreciated. Here's what I've got so far:

Also- if you would like the view to be a fixed axis to your car, simply go into your "Custom View" in your Options Menu. From there you can edit the X, Y, Z, Pitch, Rotate, etc. to achieve the shot you have visualized. Good luck!
Cars we wanna see in S3
Find post in thread
Thu, 17 May 2012 20:35
LazLoW

Excellent ideas. I can't believe I never thought of the XR6 myself. An XR chassis that can keep up with an FZ5. I like it.
LFS Development - Question Basket
Find post in thread
Thu, 17 May 2012 20:32
LazLoW

I don't care when, I'm just intrigued whether or not some rudimentary weather will come to this game? Dynamic track surfaces, simulated rain, snow and freezing rain, and dynamic weather are a list of things that I don't believe are even required yet.
A simple slick surface as if it had "just rained" would even suffice.
not drift on FXO
Find post in thread
Thu, 17 May 2012 19:50
LazLoW

I like your textures and it was a nice attempt. However if you plan to continue drifting I suggest working on your line and extending the drifts through the whole corner. From the outside of the entry, to the inside of the apex, to the outside of the exit, just like a racing line.
A great first impression
Find post in thread
Tue, 15 May 2012 01:41
LazLoW

Hell yeah bro! ;D the air ride itself isn't portrayed well over latency but we'll have to do a cruise video soon- you're totally invited ;P


You make a good point, I do want to experiment playing with colour/brightness settings and whatnot. Thanks for the suggestion!
LazLoW ft. Bamsefot aka Neroxide Twin Drifting
Find post in thread
Mon, 14 May 2012 19:20
LazLoW

I'm not about to get into a genre debate with you, so I won't even start.

I can't help but sense an air sarcasm in your post, however it's so difficult to sense via text I'm not even going to bother to attempt to understand the context.

If you have some constructive criticism maybe try again?

thanks for the comment.. I guess?
LazLoW ft. Bamsefot aka Neroxide Twin Drifting
Find post in thread
Mon, 14 May 2012 13:14
LazLoW

Thanks for your words!

Yeah- I've heard there's programs out there that help smooth the camerawork in LFS- I'll have to check that out.

As for the editing- you watched the video didn't you? Without the editing the video wouldn't exist- so I'll suppose you're referring to visual effects. These I like to leave out of my videos 'cause it's all fake garnish. Just like glitter, there's no point in it and it accomplishes very little. I would prefer a pure, uncut video of legitimate, skilled action, as opposed to some n00b driving around the track with cool effects, but that's just me.
LazLoW ft. Bamsefot aka Neroxide Twin Drifting
Find post in thread
LazLoW ft. Bamsefot aka Neroxide Twin Drifting
Mon, 14 May 2012 04:15
LazLoW

Blabber and Sentimental Stuff:
If you're reading this, thank you. I'm glad
you've taken some time to view my latest
release. I believe it's come a long way since
part one. Constructive criticism and suggestions
are appreciated and encouraged.
Here's my unofficial description:

Without further ado, welcome to part 2.

I think if it showed your total kms, it'd be pointless. there's a command for that /w ds
however. If there was a unique odometer for each individual car, that would be cool. Then you could say "I've driven 15,000kms in the XRT"
Cars we wanna see in S3
Find post in thread
Fri, 10 Feb 2012 07:28
LazLoW